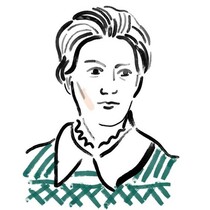 Eva Maria McLaren (née Müller;  was an English suffragist, writer and campaigner. She served as Superintendent of the Franchise department of the World's Woman's Christian Temperance Union. She was actively associated with the Woman's Liberal Federation, and was the Vice-President of the National British Women's Temperance Association. In this capacity, she presided over and lead the white ribbon forces in England when the President, Lady Henry Somerset, was absent from the post.

McLaren was superintendent of the department for work among municipal women voters; was an authority on parliamentary drill, as well as rules and procedure in debate; wrote leaflets on the subject of "The Duties of Women on Parish and District Councils"; and had the cause of woman's franchise greatly at heart. She was also a fine speaker. Her husband, Walter McLaren, MP, a nephew of John Bright, was one of the chief champions of the woman's cause in the British Parliament.

This section lists the memorials where the subject on this page is commemorated:
Eva McLaren

Founded by Elizabeth Jesser Reid as the Ladies College, the first higher educ...