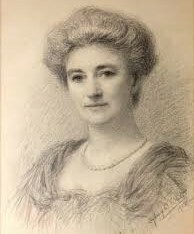 She was born as Eleanor Jane Portal on 13 May 1854 in Oakley, Basingstoke, Hampshire, the second daughter and the third of the seven children of Sir William Spencer Portal, 1st Baronet (1822-1905) and Lady Mary Jane Portal née Beach (1828-1903). Her father was a manufacturer of banknote paper employing 45 people, a magistrate and a landed proprietor.

The 1861 census shows her together with her aunt - Jane Eliza Portal (1829-1900) and her paternal grandmother - Elizabeth Portal née Drummond (1788-1877), visiting the home of Edward and Adela Knight at Chawton House, Chawton, Alton, Hampshire.

The 1871 census confirms that she was living at 97 Eaton Place, Knightsbridge, Westminster, with her parents, three sisters, two brothers, a governess, a housekeeper, a nurse, two lady's maids, a butler, a footman, a groom, a kitchen maid, a housemaid, a scullery maid, a schoolroom maid and a nursery governess.

The 1881 census informs that she was living at 19 Wilton Street, Knightsbridge, Westminster, with her husband, their two children, a nurse, a cook, a parlour-maid and an under nurse.

The 1901 census shows her living at 1 Wilton Terrace, Knightsbridge, Westminster, the home of her parents, together with her daughter and son - John Chaloner Chute, and ten servants, including a housekeeper, two lady's maids, a housemaid and two footmen.

In 1901 she became President of the Girls Friendly Society.

The 1939 England and Wales Register states she was living at 37 Cliddesden Road, Basingstoke, with her daughter, a cook and a house parlour-maid.

Probate records state that she died, aged 89 years, on 26 March 1944 at Hillstead, Cliddesden Road, Basingstoke, and when probate was granted to two of her sons, Charles Leonard Chute-barrister at law and the Reverend John Chaloner Chute on 21 July 1944 her effects totalled £4,974-12s-11d.

This section lists the memorials created by the subject on this page:
Eleanor Jane Chute

This foundation stone is behind railings, hence the squew-whiff photo.

Chairman of the Tenants &amp; Residents Association which campaigned for the ...