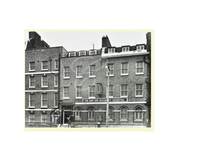 The splendid Lost Hospitals of London gives a full history. In summary: Opened as the Mothers' Lying-In Home in Glamis Road, Shadwell. 1889 moved to number 396 Commercial Road and by WW1 it had expanded into the two neighbouring properties 394 and 398, although the move into 394 was not completed until 1921 due to the war. In 1926 the building at 384-392 was also acquired.

Over the years the home went by various names: East-End Mothers' Home; East End Mothers' Lying-In Home; East End Maternity Hospital. The building was damaged in both wars but seems to have suffered no casualties. It was evacuated out of London in WW2. Taken over by the LCC in 1930 and by the NHS in 1948. Closed in 1968. The photo shows (part of) the Hospital building in 1973.

This section lists the memorials where the subject on this page is commemorated:
East End Maternity Hospital

Foundation stone laid by The Princess Royal, 7th July 1933, in the presence o...