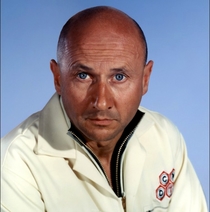 Actor. Born at 62 Potter Street, Worksop, Nottinghamshire. In an extensive career on stage, television and cinema (he appeared in over 200 films), he specialised in villainous parts such as Blofeld in the James Bond film  'You Only Live Twice'. He is also remembered as the more sympathetic character of Colin Blythe, 'The Forger' in 'The Great Escape'. Died in St Paul de Vence, France.

This section lists the memorials where the subject on this page is commemorated:
Donald Pleasence