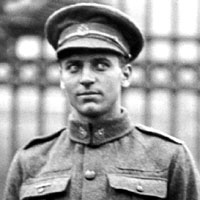 Soldier. Born at Harefield, Middlesex. His family emigrated to Canada in 1912. In 1915 he volunteered to join the 49th (Edmonton) Battalion of the Canadian Expeditionary Force. After the attack on Passchendaele Ridge his company came under intense fire. He advanced alone in broad daylight and charged an enemy machine gun, killing the crew of six and capturing the gun. For his bravery he was awarded the Victoria Cross in March 1918. Died at the Lougheed Hotel, Alberta.

This section lists the memorials where the subject on this page is commemorated:
Cecil John Kinross V.C.