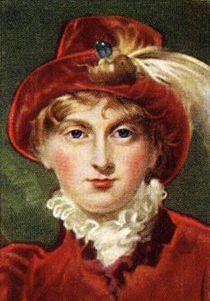 Queen Consort. Born Caroline Amelia Elizabeth in Brunswick-Wolfenbüttel in modern-day Germany. She was engaged to the future King George IV, even though he was illegally married to Maria Fitzherbert. They married in 1795 and had a daughter, Charlotte, the following year. Shortly after the child's birth, the couple parted. Rumours spread that she had taken lovers, which proved to be unfounded. Living in Italy, she only found out by chance that her daughter had died in childbirth as George had not bothered to tell her. She returned to Britain in 1820 when George became king to establish her rights as queen, but was banned from the coronation. Although she became the figurehead of a reform movement against the unpopular king, she accepted the government's offer of an allowance if she went to live abroad, but died shortly afterwards, Her body was returned to Brunswick for burial.

Not to be confused with Queen Caroline, happily married to George II.

This section lists the memorials where the subject on this page is commemorated:
Caroline of Brunswick