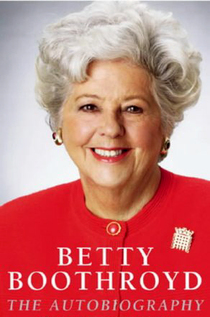 Politician. Born Betty Boothroyd in Dewsbury, Yorkshire. In the 1940s she was a dancer with the Tiller Girls troupe, and in the 1960s was a legislative assistant for an American congressman. Returning to Britain she became a local councillor and was eventually elected to parliament in 1973. In 1992 she became Speaker of the House of Commons, the first woman to occupy this post. On retirement in 2000 she was created Baroness Boothroyd of Sandwell and in 2005 was appointed to the Order of Merit.

This section lists the memorials created by the subject on this page:
Baroness Boothroyd

Robert Willan was the founder of dermatology in Britain, so it's fairly certa...

A non-profit contemporary art gallery. It focuses on a programme of commissio...

Ballerina. Danced for Diaghilev, and opened a ballet school in 1916 in London...