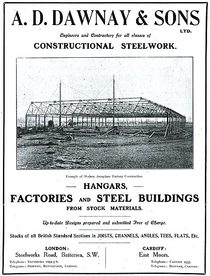 Born Archibald Davis Dawnay. Mayor of Wandsworth 1908 - his death in 1919. We can find nothing about the man but here's some information about his company, from the magnificent Grace's Guide, in 1930: "Archibald D. Dawnay and Sons, Ltd., Constructional Engineers, ... have their head offices and works at Steelworks Road, Battersea, ... and further branch works at King's Dock, Swansea; Welwyn Garden City; East Moors, Cardiff; and Norwich. This firm is one of the largest Structural engineering firms in the country ..." "Their speciality is the fabrication of all classes of Structural steelwork..."

"The firm was founded in 1870 by the late Sir Archibald D. Dawnay, and incorporated in 1897, being first conducted from offices in the City of London, but later a move was made to works Nine Elms. A second works was established at East Moors, Cardiff; and in 1908 the volume of business necessitating greater works accommodation, the London establishment was transferred to the present head offices and works at Battersea." "There is also an office in Victoria Street, Westminster, the engineering "centre of gravity" of the metropolis, etc."

This section lists the memorials created by the subject on this page:
Archibald D. Dawnay

Nice large bronze reliefs, also by Roseleib/Roslyn, attached to the left and ...

Chairman of the Planning and Communications Committee in 1982 for opening Tow...

From the website: "Each London borough is served by a trade union council (al...

London Borough of Barking and Dagenham

London borough formed by the London Government Act of 1963. The constituent p...