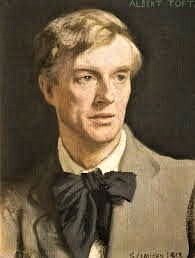 When their eldest daughter was baptised on 23 January 1889 the baptismal register shows the family residing at 4 Park Villas, Ravenscourt, Hammersmith, but by the time of their second daughter's baptism on 9 April 1890 they were shown at 58 Ravenscourt Gardens, Hammersmith and this address is confirmed in the 1891 census that showed him as a sculptor residing there with his wife, their two elder daughters, together with a female domestic servant.

When their son was baptised on 7 September 1892 the baptismal register has their address as 41 Worfield Street, Battersea and when their third daughter was baptised on 27 June 1894 the address given was 64 Cromwell Road, Wimbledon. However the electoral registers for 1895 show the address to have been 30 Cromwell Road, South Wimbledon. Their fourth daughter's baptismal record of 14 October 1896 shows the family residing at 63 Coniger Road, Parson's Green.

London Directories from 1890 to 1902 show him as a sculptor and his brother Joseph as an artist at 11 Trafalgar Studios, Manresa Road, Chelsea.

Electoral register for 1900 and 1901 show him listed at 30 Charlwood Road, Putney and this address is confirmed in the 1901 census that shows him as a sculptor living there with his wife and their five children.  Post Office London Directories  from 1910 to 1915 show him at 87 Clifton Hill, St John's Wood and this is address confirmed in the 1911 census where he is shown as a widower and sculptor with his five children and a female general domestic servant. The census also informs that he and his deceased wife had six children, only five of whom were still alive.

Electoral registers from 1945 to 1948 show him and his daughter, Florence, listed at 30 Abbey Road, St John's Wood, but the 1949 register shows their address as 30a Abbey Road.

Probate records confirm that his address had been 30a Abbey Road, St John's Wood, and that he had died, aged 87 years, on 18 December 1949 in a nursing home at 22 Downview Road, Worthing. Probate was granted on 4 March 1950 to Clarence Stanhope Harding, an artist, and to John Bryning Richardson, a consulting engineer. His effects totalled £16,367-18s-2d.

This section lists the memorials created by the subject on this page:
Albert Toft

Sculptor. She has created group sculptures for the most recent Olympics in Be...