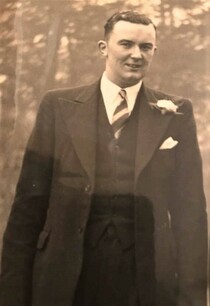 The London Gazette shows that on 8 May 1931 he was appointed as a Temporary Postman Messenger and Post Office records confirm that he was based in the London West Central Office of the G.P.O. Their records also show that he was promoted to Postman in their Western District Office in February 1934 and another promotion to Sorter on 8 February 1937.

Electoral registers up to 1932 list his mother at 91 Moundfield Road, but from 1934 she was registered at 89 Moundfield Road. This address was confirmed in they 1939 England and Wales Register that shows him as a G.P.O. Sorter living there with his mother and his sister Vera Evelyn Alexander (1911-1997) who was a ladies hairdresser.

He joined the Royal Navy, service number P/JX248727, and was serving on the battleship H.M.S. Barham when, on his 27th birthday, it was hit by three torpedoes from the German submarine U331 off the coast of Sidi Barrani, Egypt, at 4.25pm on the 25th November 1941. Of the 1,184 officers and men on board, he was one of the 841 who were killed. As his body was lost at sea he is commemorated on Panel 52, Column 1, of the Portsmouth Naval Memorial, Southsea, Hampshire.

This section lists the memorials where the subject on this page is commemorated:
A. H. H. Alexander

Sculptor and medallist. Born in Watford to an artistic family as Thomas Humph...