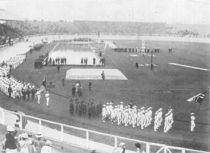 The original plan was that Italy would host these games but in 1906 they dropped out, partly due to the consequential costs of the 1906 eruption of Mount Vesuvius.  Within a week the IOC accepted Britain’s proposal to hold the games.  The area between Shepherd’s Bush and Wormwood Scrubs was at the time ear-marked for the 1908 Franco-British Exhibition.  A deal was struck and the exhibition organisers added a stadium to their development in return for most of the ticket receipts.

The games ran from July to October with this stadium being the main venue.  Others were: Wimbledon, Bisley, Henley, Southampton, Knightsbridge.

The games began on 6 July and were opened by King Edward VII. From the end of the games through to WW1 a number of exhibitions were held on the site.  Many of the buildings in at least the last show were clad in white marble, or made to look as if they were, hence ‘White City’.  In subsequent years the stadium was used for various events such as greyhound racing, athletics and horse shows but in 1985 the site was bought by the BBC and the stadium demolished to make way for the BBC White City complex.

Games Statistics from the BBC: “3,000 competitors took part in the 1908 Olympics, split into 21 teams. This was the first games to award gold, silver and bronze medals, and the first in which all entrants had to compete as members of national teams, rather than as individuals. The Games established the length of the marathon as 26 miles and 385 yards - the extra length was to allow the course, which ran from Windsor to the Stadium, to begin outside the royal nursery at Windsor Castle. Britain had the largest team and achieved the most medals, although the US team won more for athletics.”

The Guardian did a good post on the event.

This section lists the memorials where the subject on this page is commemorated:
1908 Olympics & Stadium

Boxer. Born Judah Bergman above a fish shop in Christian Street, according to...

From British History on-line:  "In the reign of Henry VIII., when Shoreditch ...