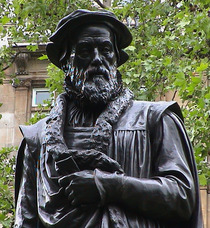 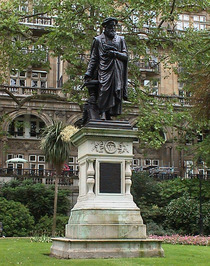 {On a bronze plaque on the front of the plinth and repeated in a low plaque nearer the path:}
William Tyndale
First translator of the New Testament into English from the Greek. Born A.D. 1484, died a martyr at Vilvorde in Belgium, A.D. 1536.
"Thy word is a lamp to my feet, and a light to my path" - "the entrance of thy words giveth light." Psalm CXIX. 105.130.
"And this is the record that God hath given to us eternal life, and this life is in his son." I. John V.II.
The last words of William Tyndale were "Lord! Open the King of England's eyes". Within a year afterwards, a bible was placed in every parish church by the King's command.

This section lists the subjects commemorated on the memorial on this page:
William Tyndale

This section lists the subjects who helped to create/erect the memorial on this page:
William Tyndale

Court of Common Council of the City of London, Belfast, Ireland

This statue original had figures representing Temperance, Peace, Fortitude an...

This statue thought in the nineteenth century to be of Queen Anne is now wide...