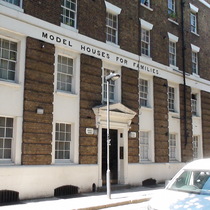 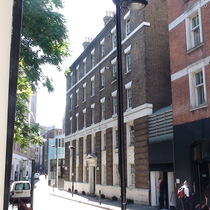 {On the first floor frieze above the door:}
Model houses for families"

There is no plaque (2022) but this is any important building so we decided to collect it.

Originally called 'Streatham Street Buildings' these are said to be the earliest surviving social housing flats in the world. RIBA has a drawing and plan dated at 1845.

European Route of Industrial Heritage gives "The most distinctive form of working-class housing in 19th century London was the multi-storey apartment block, built originally by charitable societies, and from the 1890s by public authorities. The prototype for such blocks was the Sailors’ Home in Well Street, Whitechapel (now demolished), opened in 1835 and designed by Henry Roberts (1803-76) the architect who set the pattern for philanthropic housing schemes in London, and influenced developments in Belgium, the Netherlands, France and Russia. In 1844 Roberts was a founder member of the Society for Improving the Condition of the Labouring Classes, for whom he built a set of Model Dwellings in Pentonville in 1844, and a model lodging house off Drury Lane in 1846. Both have been demolished, but his next project for the Society, a group of dwellings for 48 families in three blocks built around a courtyard in Streatham Street ... remains. Access to the apartments is by wrought-iron balconies, they are of fireproof construction, and each, at the time of construction, had its own water closet, a revolutionary feature for working class dwellings in England. Roberts went on to design the Model Houses shown at the Great Exhibition, now re-erected in Kennington Park Road, and several other blocks of apartments, but his career was cut short by scandal, and after 1853 he spent most of his time in Italy."

'Scandal' caught our eye and we found an explanation at Scottish Architects: "In 1847 he had married the daughter of a Russian nobleman, Catherine de Swetschine, but by 1853 {aged 50} he was engaged in an indiscreet liaison with a working class lady described as 'a member of the lower orders'." And for that it seems he was lost to architecture for the next 26 years until his death in Florence.

This object is known as an armillary sphere, or astrolab - a skeletal celesti...