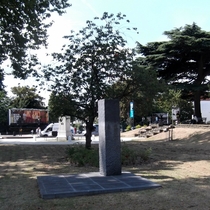 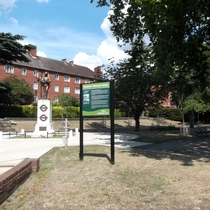 {Inscription on platform supporting the monument:}
Grief has no boundaries
This civilian war memorial is a focus for our thoughts and prayers for the pain and anguish of ordinary people who have been touched by conflicts.

"Grief has no boundaries" is a quotation from a poem by Rohit Sapra.

The information board defines the scope for this memorial: "people of all races, faiths and nationalities living or who have lived in Streatham and have been affected by violent conflicts or wars wherever they have occurred." These rather convoluted words exclude, for example, those who have worked in Streatham, or run businesses here or attended schools here. The authors clearly wanted to be inclusive but might have done better to be less specific.

This section lists the subjects commemorated on the memorial on this page:
Streatham citizens' war memorial

This section lists the subjects who helped to create/erect the memorial on this page:
Streatham citizens' war memorial

This section lists the other memorials at the same location as the memorial on this page:
Streatham citizens' war memorial