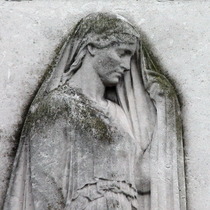 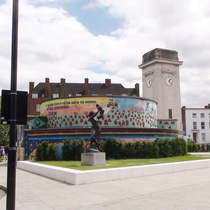 {On the plinth of the relief, above the door:}
To the Stockwell men who served in the Great War

{On the other three sides of the tower are stone tablets carrying the list of the dead of WW1.  See Subjects commemorated for the 574 names.

Above the names each tablet carries a phrase:}

Their name liveth for evermore
{from the Bible, Ecclesiasticus 44.14, KJV}

The design of this Portland stone clock tower was chosen through competition by a committee of the Royal Academy from a field of 80. The relief depicts a heavily veiled Remembrance clutching a laurel wreath with a helmet and a broken sword of war at her feet. This was designed by Clemens and carved by Francis. Monument unveiled by Princess Alice.

The monument has its own website and a friends group both set up by Naomi Klein who has thoroughly researched this memorial (and others in Lambeth) and written a book about it; £3 from every sale goes to the friends' funds. At the website you can look up personal information of each of the names of the dead.

There is also some information about the monument at the Vauxhall Civic Society.

This section lists the subjects commemorated on the memorial on this page:
Stockwell War Memorial

Stockwell men who served in WW1

"Stockwell men who served in the Great War".

This section lists the subjects who helped to create/erect the memorial on this page:
Stockwell War Memorial

Born Princess Alice of Albany at Windsor Castle, daughter of Prince Leopold a...

Sculptor based in Chelsea.  Born Dalston.  Served in WW1.  Other work in Lond...

Architect of John Street and/or Bedford Row, our source, The Vauxhall Society...

Romantic poet.  Born Cumberland, with the perfect name for a poet (see Isamba...

This section lists the other memorials at the same location as the memorial on this page:
Stockwell War Memorial

{There are 5 panels alternating with a balustrade. On the central panel, ins...