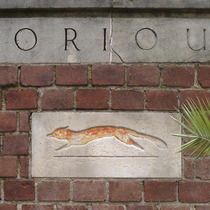 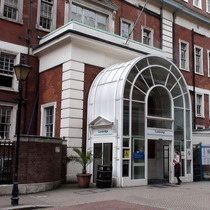 {On a frieze along the wall to the left of the entrance:}
To the glorious memory
{On a stone plaque below this: a reverse relief of a running fox (coloured)}

The ugly modern entrance, plonked on the front of the building, has totally ruined the integrity of this memorial.

We were surprised to learn that Albert Speer, the Nazi leader, died at this hospital. He was convicted at the Nuremberg trials, served 20 years imprisonment and was released in 1966. He visited London in 1973 and again in 1981, when he suffered a stroke and died later at this hospital on 1 September.

This section lists the subjects commemorated on the memorial on this page:
St Mary's Hospital - WW1 memorial

The British Reserve Army was formed in May 1916 and renamed as the Fifth Army...