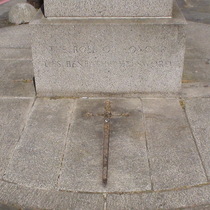 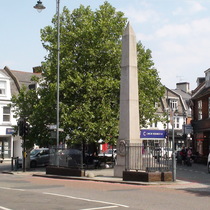 {On the south face of the plinth:}
In memory of the men of Mortlake and East Sheen who gave their lives.

{On the south face of the base:}
The roll of honour lies beneath the sword.

{On the east face of the plinth below a laurel wreath:}
The glorious dead.

{On the west face of the plinth below a laurel wreath:}
Their name liveth for evermore.

This monument appears in a scene shot on location in the 1973 movie 'Vault of Horror' (segment 5 'Drawn and Quartered'). There you see the obelisk on a small circular traffic island with a larger island very close, to the north, on which are (what are almost certainly) the entrances to underground toilets. These have of course gone and the two islands have been merged into one, with some railings placed rather randomly around the edge. These look like the railings around the steps to the toilets so it seems they were saved and reused.

The sword on the ground above the roll of honour is a rather nice feature which we have not met before.

The milestone is to the left of our photo, behind the traffic light post.

This section lists the subjects commemorated on the memorial on this page:
Sheen war memorial

This section lists the other memorials at the same location as the memorial on this page:
Sheen war memorial