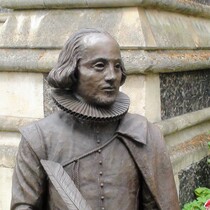 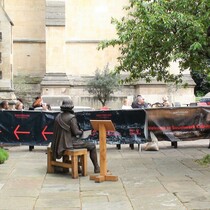 Around 1590, William Shakespeare began a successful career in London as a member of an acting troupe known as the Lord Chamberlain's Men. They worked and performed at 'The Theatre' - London's first permanent purpose-built playhouse.

This statue was commissioned to commemorate the opening of a new exhibition on the site of the remains of The Theatre in Shoreditch.

The Theatre, built in 1576, was demolished in late 1598 and its materials used to build the original Globe Theatre on Bankside.

From the Cathedral: "Sculpted by acclaimed British sculptor Raphael Maklouf who was assisted by Hayley Gibbs".

This was commissioned for The Theatre Courtyard Gallery and is only here on loan.  We expect that once the works in New Inn are completed it will be re-unveiled at its intended home.

This section lists the subjects commemorated on the memorial on this page:
Shakespeare statue

The site of The Theatre is the tall building to the left in the picture. Ofte...

This section lists the subjects who helped to create/erect the memorial on this page:
Shakespeare statue

Sculptor. Another public statue by Gibbs, Nancy Astor, was unveiled on Plymou...

Born in Jerusalem, to a Jewish family who emigrated to the UK after WW2. His ...

The inspiration for the statue was the sculptor's daughter Kate skipping in t...