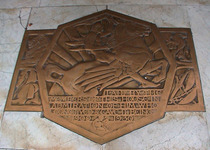 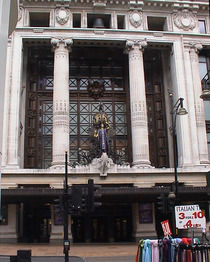 This plaque has been in our Puzzle Corner since we first found it, at least 10 years ago. Now, 2016, Londonist has prompted us to solve the puzzle. Their very interesting post Secrets of Selfridges points out that the magnificent Queen of Time Clock on the façade, immediately above this plaque, was installed in 1931 to mark the store's 21st birthday, and it is by Gilbert Bayes.

Since the store opened in 1909 we deduce that the management used the occasion of about 20 or 21 years to celebrate and, more importantly, publicise the store. Those years were a financial low point for Selfridge and for the economy generally so any way of drumming up business would be welcome.

The statue above this splendid Art-Deco entrance is the Queen of Time riding in her Ship of Commerce by Gilbert Bayes. See Ornamental Passions for details. It has also been credited to Henry Poole.

2016: Ian Visits has unearthed papers detailing discussions between Selfridges and London Underground about building a tunnel from the store to Bond Street Station, sadly never built.

This section lists the subjects commemorated on the memorial on this page:
Selfridges

This section lists the subjects who helped to create/erect the memorial on this page:
Selfridges

The stone is somewhat damaged which means the G of Holman's name is uncertain.

Corporation of LondonSite of Upholders' Hall destroyed in the Great Fire 1666.

{Below an image of a Victoria Cross medal:}Second Lieutenant Geoffrey Woolley...