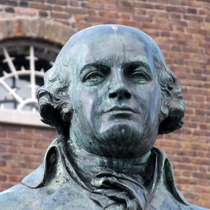 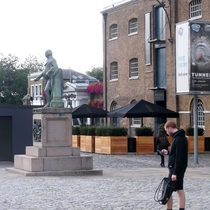 {At the base of the statue:} Robert Milligan

{The front panel of the plinth has a relief tableau of a seated helmeted figure and a female figure with three cherubs.}

{Rear panel of the plinth:}
To perpetuate on this spot the memory of Richard Milligan, a merchant of London, to whose genius, perseverance and guardian care the surrounding great work principally owes it's {sic} design, accomplishment and regulation, the directors and proprietors, deprived by his death on the 21st May 1809 of the continuance of his invaluable services, by their unanimous vote have caused this statue to be erected.

This statue used to be at the main gate but was removed in 1943, presumably to avoid bomb damage. Reinstated here in 1997 by the Dockland development.

9 June 2020: Responding to the 'Black Lives Matter' protests, this statue was removed by the Canal and River Trust. A local councillor had said "Those who benefited from the enslavement of innocent and tortured individuals, do not deserve the honour of a statue." And, within days, it was gone.

March 2021: Dennis Jenner let us know that Tower Hamlets are consulting on what should now happen to the statue and its plinth.

March 2022: A media release from the Museum of London announced "A bronze sculpture of the merchant and slave trader Robert Milligan, removed from West India Quay in June 2020, will join the collections of the Museum of London. .. where it can be fully contextualised."

This section lists the subjects commemorated on the memorial on this page:
Robert Milligan statue

This section lists the subjects who helped to create/erect the memorial on this page:
Robert Milligan statue

The bronze statue depicts the Queen as she would have looked when she started...