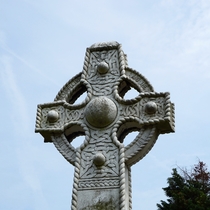 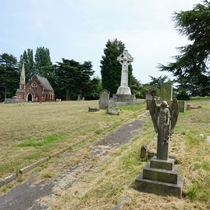 {In the circle at the top of the monument, on the west side:}
I am the resurrection and the life.

{In the circle at the top of the monument, on the east side:}
In Christ shall all be made alive.

{On the four faces of the base of the cross:}

The saloon steamer "Princess Alice" returning from a pleasure excursion was wrecked off Tripcock Point by collision with the steam collier "Bywell Castle" on the night of September 3rd 1878.

It was computed that seven hundred men women and children were on board. Of these about 550 were drowned. One hundred and twenty were buried near this place.

To the memory of those who perished this cross was erected by a national sixpenny subscription to which more than 23000 persons contributed.

"In the midst of life we are in death" Jesu mercy.

The numbers of passengers and victims differ from most other sources.

Following the disaster bodies washed up on both banks of the Thames, between Limehouse and Erith, but mainly in the Woolwich area. Most were kept for identification at Woolwich Dockyard. Those on the north bank were transferred to Woolwich. On 9 September those still unidentified were buried in a mass grave in Woolwich, at this spot.

This section lists the subjects commemorated on the memorial on this page:
Princess Alice Disaster - memorial