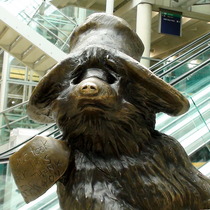 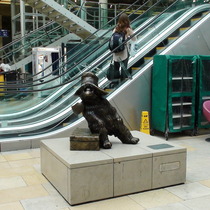 {The statue has two integral texts:
On a label stuck to the suitcase:}
Wanted on voyage.

{and written on a label attached to Paddington’s neck:}
Please look after this bear.  Thank you

{Plaque on the top of the plinth:}
Mr and Mrs Brown first met Paddington on a railway platform.  In fact, that was how he came to have such an unusual name for a bear, for Paddington was the name of the station.
From “A Bear Called Paddington” by Michael Bond.
So began Paddington Bear’s long association with this station.

{Plaque on the front of the plinth:}
This statue was designed by Marcus Cornish and is based on the illustrations of Paddington Bear by Peggy Fortnum. It acknowledges the enormous pleasure which Michael Bond’s creation has given to millions of children and adults throughout the world since his first book was published in 1958.

This section lists the subjects commemorated on the memorial on this page:
Paddington Bear

This section lists the subjects who helped to create/erect the memorial on this page:
Paddington Bear

Sculptor. Other work in London includes the 2001 'Stag' in St James's Square.

Our image (1835 by George Sidney Shepherd) comes from View from the Mirror wh...