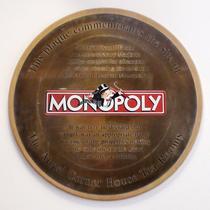 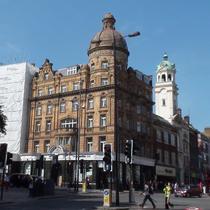 {In a circle around the edge of the plaque:}
This plaque commemorates the site of The Angel Corner House Tea Rooms.
{In the body of the plaque:}
In 1935 Victor Watson and his secretary Marjorie Phillips stopped for afternoon tea whilst choosing the sites for the original London Monopoly.
Monopoly
It was here he decided that 'Angel' was an appropriate name for one of the properties making it the only site on the board named after a building.

Victor and Marjorie came to London from Leeds specifically to select names for the board. Having been out on a name-gathering 'morning taxi ride' they stopped here and rather than look further chose 'The Angel' as the last name.

The plaque is inside the building, in the area open to the public.

January 2015: we learn that this historic building (architects: Frederick James Eedle and Sydney Herbert Meyers) is under threat from Crossrail 2.

This section lists the subjects commemorated on the memorial on this page:
Monopoly

Evolved from a number of property games but had reached its final form by 193...

Secretary to Victor Watson. Somtimes spelt 'Marjory' but the plaque has 'ie'.

This section lists the subjects who helped to create/erect the memorial on this page:
Monopoly

At Messrs. Hatchard's in a house on this site The Royal Horticultural Society...