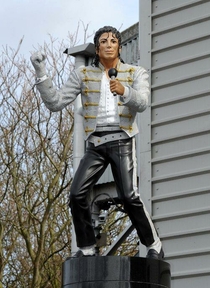 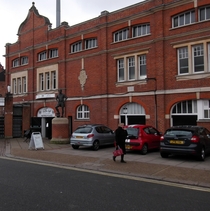 The plinth was inscribed with lyrics from Jackson's hit 'Man in the Mirror'.

This memorial is no longer here. Michael Jackson was a friend of Mohamed Al-Fayed, one-time owner of Fulham Football Club. The singer's only connection with the club, was that he once went to see a match there, in 1999. After Jackson's death, Al-Fayed commissioned the statue with the intention of installing it in Harrods. However he sold the department store before the statue was completed and erected it outside the football ground instead - much to the disapproval of the club's fans. His less than gracious reaction was to tell them to 'go to hell'. When he sold the club, the statue was moved to the inside of the stadium, where it became the focus of derision from visiting teams' supporters. Eventually it was removed and put into storage. In April 2014 it was announced that it is to be lent to the National Football Museum in Manchester, and we suspect, it will not return. Picture from Contact Music.

March 2019: The NME reports that, following revived allegations of him sexually abusing children, this statue has been removed from the Football Museum.

This section lists the subjects commemorated on the memorial on this page:
Michael Jackson

Singer-songwriter. Born in Gary, Indiana.  Arguably the most successful perfo...

This section lists the subjects who helped to create/erect the memorial on this page:
Michael Jackson

This section lists the other memorials at the same location as the memorial on this page:
Michael Jackson

Fulham 2000 To commemorate the significant contribution to the restoration of...

{Around plinth of statue:} Johnny Haynes 2005, 'The Maestro' captain of Engla...