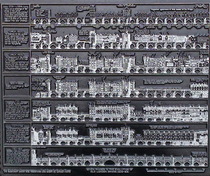 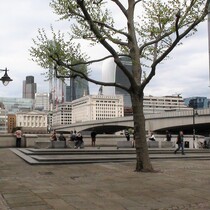 {On the panel:}
The Jubilee Walkway – Southwark
This panel is dedicated to the memory of Sir James Swaffield, Director of the GLC between 1973 and 1984 and a Trustee of the Jubilee Walkway Trust from 1977 until 2012. The Jubilee Walkway is a popular 14 mile walk connecting up many of the main attractions in London and has inspired the Outdoor Trust to develop similar Walkways in the main cities of the Commonwealth.

London Bridge
Roman soldiers built the first wooden bridge over the Thames near here around 43 AD to connect Londinium to Southwark and London grew rapidly as a result.

In 1176, after successive wooden bridges were destroyed by fire, Henry II commissioned a stone crossing under the supervision of an Essex priest, Peter de Colechurch (d.1205). It took 33 years to complete and was to last more than 600 years. The 275m long, 8m wide bridge was supported on 20 Gothic arches and featured a central chapel and a host of shops and houses (the rent from which funded its construction and upkeep).

In 1281 expanding ice from the frozen Thames crushed five of the arches and Queen Eleanor was blamed for misappropriating bridge revenues and failing to use them for repairs. This gave rise to the popular rhyme: ‘London Bridge is falling down – my fair lady’.

In 1722, to ease congestion, the Lord Mayor decreed that ‘all carts, coaches and other carriages coming out of Southwark keep along the west side and those going out of the City keep along the east side.’ It has been suggested that this may have inspired traffic driving on the left in Britain.

The houses and shops on the bridge were demolished to ease traffic flow between 1758 and 1762, and the bridge modified to improve navigation on the river, but the congestion did not improve.

In 1831 King William IV and Queen Adelaide opened a new 15m wide bridge, designed by John Rennie the Elder (1761 – 1821), made from Haytor granite in a five arch design. It was widened by a further 4 meters but remained a pinch point for London’s traffic. In 1896 the bridge was the busiest point in London, with more than 8,000 pedestrians and 900 vehicles crossing hourly and the bridge was sinking about 2.5cm every eight years under the weight.

In 1968 Rennie’s bridge was sold by the City of London to an American, the Missourian entrepreneur Robert P. McCulloch (1911 – 77), for US$2,460,000. It was taken apart, reconstructed piece by piece at Lake Havasu City, Arizona and re-dedicated on 10 October 1971. It is still there today. Some of the old London Bridge granite footings are in this square.

The current London Bridge was designed by Lord Holford (1907 – 75) and opened by the Queen in 1973. The 283m long Bridge is made of three spans of concrete box girders and cost £4 million.

Unveiled by HRH the Duke of Gloucester in the 40th anniversary year of the Jubilee Walkway 1977 – 2017.

Unveiled by the Duke of Gloucester, this is actually an "interpretation panel". It shows the, modern (2017) , river view from Cathedral Square, and the seven phases of London Bridge from 1209 to 1831 drawn by Gordon Home. We have used the 'seven phases' for our image. The text at the left of each phase specifies the historic source for that drawing.  Betonbabe has a copy of the original drawing which is a bit clearer. This drawing was used on an earlier, nearby, memorial, now lost.

London SE1 is referring to this lost memorial when it writes that this drawing was reproduced on a metal plate attached to a stone from the 1831 London Bridge, left in Cathedral Square. When Home's great grandson noticed that this plate was in a very bad state (which we'd noticed in 2016) it was decided to include the drawing on this panel.

In our photo the pavement plaque is between the two groups of seating, about where the person reading the information panel, is standing.

No sooner did we collect and do all the research for the information panel than it got removed. In June 2022 it was replaced with a panel about the June 2017 terrorists attacks on London Bridge.  We will publish that one soon.

There are plans to re-erect the information panel, in this square, but it's not clear when.

This section lists the subjects commemorated on the memorial on this page:
London Bridge - information/viewing panel - gone

The first phase of what was initially called the Silver Jubilee Walkway was o...

His name, sometimes given as Peter de Colechurch, is connected to the church ...

Banker. Lived in Sheen. As Lord Mayor he decreed that on London Bridge carria...

This section lists the subjects who helped to create/erect the memorial on this page:
London Bridge - information/viewing panel - gone

This section lists the other memorials at the same location as the memorial on this page:
London Bridge - information/viewing panel - gone

Not a memorial but a celebration of the local people, pictures of this artwor...

The Institute of Taxation founded on this site 1930.City of London