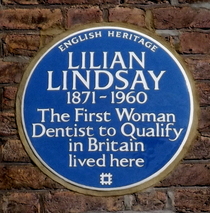 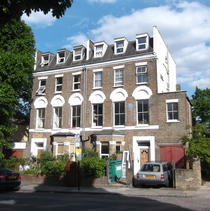 There is evidence that Lindsay lived with her parents and siblings in this road at number 29 and also at number 3. Our colleague Andrew Behan has found that the road was renumbered in 1874 (having been built/occupied 1862-1873). Andrew reports that various baptismal records and census returns support the understanding that the family never moved and that in 1874 their house was renumbered from 29 to 3, under their feet, as it were. However there are no details of how the renumbering was done and, just to add mud to the waters, the 1873 baptismal record for one of her brothers gives the address as 81 Hungerford Road - surely an error on the part of a busy and confused vicar.

2018: We saw this plaque displayed in an exhibition about memorials. The label there said "It once marked her home in Holloway, north London, which has since been demolished. Negotiations are underway to re-site the plaque at another of her homes." Google Street View shows that the plaque was erected on 3 Hungerford Road between May 2012 and June 2014, actually before September 2013 since that is when we photographed it. We were very surprised to read that the house, a very nice Victorian semi, had been demolished, but all was explained....

2019: The Islington Tribune reported that the developer had been fined £60,000 for demolishing the house, and its neighbour, without permission, in 2017. The article reports: "The silver lining in this story is that we have found another suitable building for Lilian’s plaque – the old British Dental Association headquarters in Bloomsbury..." at 23 Russell Square.

Being a dentist, Lindsay would not have been surprised at all the plaque talk (sorry, irresistible).

This section lists the subjects commemorated on the memorial on this page:
Lilian Lindsay

This section lists the subjects who helped to create/erect the memorial on this page:
Lilian Lindsay

{Around the outside rim of the basin:} This garden was presented by the Londo...