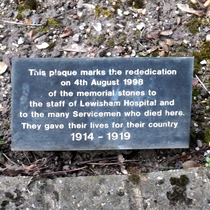 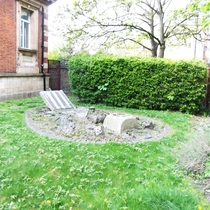 {Small stone:}
Dedicated to the brave men who died in this hospital and laid down their lives for the British Empire, 1914 - 1919, and to Dorothy Goodman and Helen Knibb who died at their post of duty nursing the sick and wounded.
Erected by the medical and nursing staff Lewisham Military Hospital.

{Small plaque:}
This plaque marks the rededication on 4th August 1998 of the memorial stones to the staff of Lewisham Hospital and to the servicemen who died here. They gave their lives for their country.
1914 - 1919

Some of the names on the memorial are illegible. We have found a list on the War Memorials Register and another on the Lewisham War Memorials website, but there are many differences between them. Our list of names is therefore not definitive.

We were curious to hear how the two nurses had died - had the hospital been bombed? Thanks to Andrew Behan's research we know that Goodman died of influenza and pneumonia. No cause of death has been found for Knibb.

LewishamFWW gives: "Lewisham Military Hospital closed in May 1919 and was returned to the Board of Guardians. ... Lewisham Hospital became part of the newly formed National Health Service in 1948. ... In 1919 a stone column and cross memorial was erected by the medical and nursing staff opposite the hospital gates to those servicemen who died in Lewisham Military Hospital and to nurses Dorothy Goodman and Helen Knibb who both died at their posts. Sadly this memorial was destroyed during the Second World War but the surviving stones are now part of a small memorial garden in front of the former public library which is now part of University Hospital Lewisham."

Lewisham War Memorials describes the original memorial as: "In 1919 a memorial consisting of an ornamented stone column on a Cornish granite slab and brickwork base and surmounted by a decorative cross was set up opposite the main gate of the Lewisham Military Hospital. It was between 12 and 15 feet in height."

Lewisham War Memorials also has a list of the names with some good research on many of them. We are indebted to that site for the information we have on the three 'officers of this institution'.

This section lists the subjects commemorated on the memorial on this page:
Lewisham Hospital war memorial

Frederic Thomas Atkinson was born in Crewkerne, Somerset, the sixth of the ni...