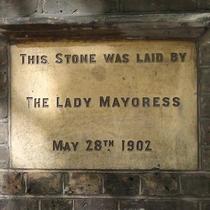 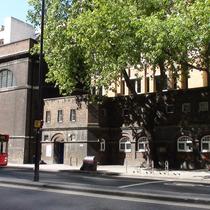 The Lord Mayor of London at the time of the stone laying was Marcus Samuel, first Viscount Bearsted, who had married Fanny Elizabeth Benjamin in 1881 so it seems this is the lady who laid the stone.

EC2, London Wall, All hallows on the Wall Church

The church is the large building to the west. The building with the plaque looks like an extension of some sort and it is of a date that the plaque could be the foundation stone. The building looks incomplete to us and we hazard a guess that it was damaged, probably in wartime, and that the current first floor is a later addition.

This section lists the subjects commemorated on the memorial on this page:
Lady Mayoress