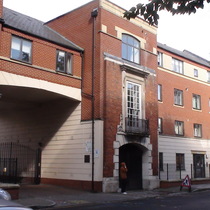 Through the gate we can see the war memorial with a long list of names, most nicely picked out but some damaged by what looks like damp. It was so dark that our photos failed so we are grateful that London Lately had one on their interesting "now and then" page about this building.

A memorial event is held here annually on Remembrance Sunday, and apparently it is intended, in due course, to make the archway accessible to the public.

The original WW1 memorial consisted of the whole Casualty Department building including this arch and the list of names that it contains.  When that building was demolished (by 1997) this arch was saved, and the plaque on the outside that explained the whole-building nature of the memorial was salvaged and erected in the nearby public garden. Inside the arch is the more standard war memorial but, now part of a private residential development, this is not accessible. Islington’s Book of Remembrance has provided the text that we can just glimpse through the gates, but not the list of 1,337 names.

The two plaques refer to the construction of the new Royal Northern Hospital Casualty Department, July - November 1923. The building itself was created as a war memorial, with the list of the fallen inside this surviving arch.

This section lists the subjects commemorated on the memorial on this page:
Islington War memorial arch - names

This section lists the other memorials at the same location as the memorial on this page:
Islington War memorial arch - names

We don't normally collect benches but large, unusual plaques like this one ar...