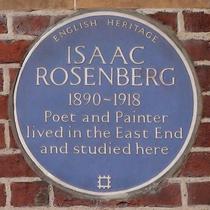 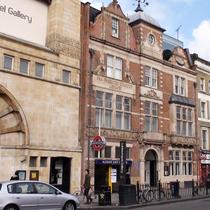 Originally the 1892 Passmore Edwards Library this building is now part of the Whitechapel Art Gallery, based in the building next door with the stunning Art Nouveau facade, shown in our photo before the 2012 Rachel Whiteread enhancement which is covered by Ornamental Passions.

From Litro "... nicknamed the University of the Ghetto ... many writers who grew up in the area were regular visitors, using the library as an escape, and its books as an education.  Artists Mark Gertler and David Bomberg and the poet Isaac Rosenberg were regulars, later to be known as members of the Whitechapel Boys."

This section lists the subjects commemorated on the memorial on this page:
Isaac Rosenberg

This section lists the subjects who helped to create/erect the memorial on this page:
Isaac Rosenberg

This marker was formerly attached to the western range of buildings at St Kat...

91 - 101 Worship Street. Built as workshops and dwellings. Designed by Philip...