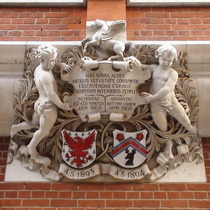 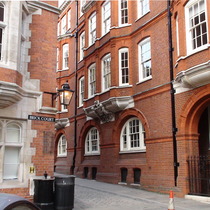 David Hopkins, our Latin consultant, has again applied his skills and provided the translation. He also writes: "I know nothing about heraldry, but the Latin abbreviation 'ARMo' means that these two men were 'armigers', individuals entitled to use a coat of arms.  So I'm guessing the two shields are their respective coats of arms. 'A.S.' is an abbreviation for 'anno salutis', which means 'in the year of our salvation'.  It is an alternative for 'A.D.', 'anno domini' (= 'in the year of our Lord')." As always, a full answer. Thank you, David.

This section lists the subjects commemorated on the memorial on this page:
Hare Court rebuilt

To people who don't have any prior knowledge that last sentence is a bit of a...