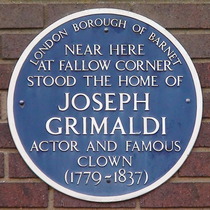 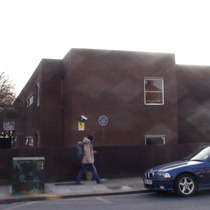 Near here at Fallow Corner stood the home of Joseph Grimaldi, actor and famous clown (1779 - 1837).
London Borough of Barnet

Dickens re-edited Grimaldi’s memoirs 1837-8. He worked from Thomas Wilks' edited version of Grimaldi’s original, which is now lost so the veracity of the memoirs is uncertain. It is likely that it was through this job that Dickens first came to know this area, even though Grimaldi was dead by the time he got involved in the project. Dickens later came to live nearby.

There is another plaque to Grimaldi's home very close by.

This section lists the subjects commemorated on the memorial on this page:
Grimaldi - N12

This section lists the subjects who helped to create/erect the memorial on this page:
Grimaldi - N12

Barnet keep their logo at the bottom right of their website pages.  We think ...