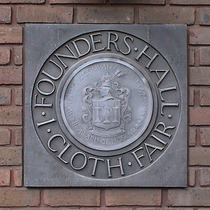 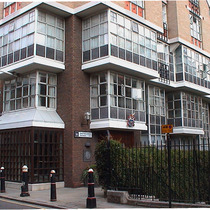 This was the third site of the Founders Hall which was built here 1985-7. The two plaques are either side of a very impressive solid wooden door which seems unused.

The black panels below the lower windows, presumably from a foundry, show circles split into quadrants, 2 or 3 of which contain a letter. At first glance this alphabet soup is very puzzling but we guess that these are initials of important people of the Founders' Company from the past.

From the Founders' website: "The new Hall was designed by Sam Lloyd and the building much reflects the traditions so ably established by his grandfather, William Curtis Green (1875-1960), one of the leading Arts and Crafts house architects. The latest Founders' Hall rejects the modern movement and is built of traditional materials in a manner which is in keeping with this historic part of the City. The Hall was opened by the Lord Mayor, Sir David Rowe-Ham, in September 1987."

This section lists the subjects commemorated on the memorial on this page:
Founders' Hall - Cloth Fair, with crest

The Founders' first hall was built in what is still called "Founders' Court" ...

This section lists the subjects who helped to create/erect the memorial on this page:
Founders' Hall - Cloth Fair, with crest

This section lists the other memorials at the same location as the memorial on this page:
Founders' Hall - Cloth Fair, with crest

Site of the Duke of Buckingham's house 1672.The Corporation of the City of Lo...

Surrey Docks fire. On September 7th 1940 the docks were set on fire in the fi...