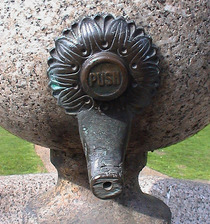 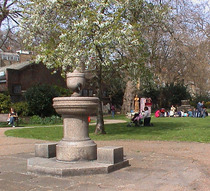 Compare and contrast with Emily Orbell's fountain (B).

The gardens’ information board is interesting:

St George’s Gardens was one of the very first burial grounds to be established away from a church.  The land was bought in 1713 to serve the parishioners of two churches, St George the Martyr, Queen Square and St George, Bloomsbury, the latter (still then unbuilt) by the great architect Nicholas Hawksmoor.  The plot, which was just over a hectare, lay out in the open fields, well to the north of Bloomsbury.  It was divided in two by a wall, demarcating the two parishes.

To begin with families were reluctant to have their relatives buried so far from town, but an influential churchman, Robert Nelson, stated that he wished to be buried there and soon others followed.  By 1725 there were around twenty burials a month.  The few exceptional monuments still standing represent the many hundreds of men, women and children buried in unmarked graves in this small space over more than a century.

By the early 1800s the burial ground was already in a very bad state and by 1855 the overcrowding was such that it finally closed.  Thirty years later it was reopened, in two stages, as a public garden, a pioneering example in a movement which aimed to make the many overgrown urban graveyards into ‘open air sitting rooms’ for the poor, in the words of housing reformer Octavia Hill.  William Holmes who designed the garden united the two burial plots and gave it a typically Victorian air, with meandering paths and lawns.  The already mature London plane trees remained, with the chest tombs and monuments, to remind its users of the garden’s early 18th century origins.

Damage in World War II led to the loss of the Board School and Prospect Terrace at the east end, but otherwise the park has remained little changed to the present day, undisturbed by traffic and an oasis of calm for the local community.  In the late 1990s the gardens were one of the first public spaces to receive Heritage Lottery Funding under the Urban Parks programme.

This section lists the subjects commemorated on the memorial on this page:
Emily Orbell's fountain (A)

This section lists the subjects who helped to create/erect the memorial on this page:
Emily Orbell's fountain (A)

{On one end:}Devas 1887 {and on the sides:}Metropolitan Drinking Fountain an...