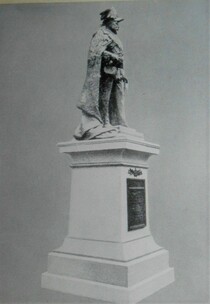 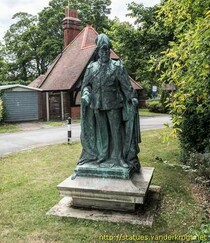 {Plaque at the base:}
Erected in Euston Road London to commemorate the opening in 1906 of the Society's Head Office by King Edward VII. This statue was placed here in December 1966.

Mapping Sculpture, Sitwell and the eBay Centenary Book all give Hampton as the sculptor.

The banishment of this statue from London out to one of the satellite sites of the organisation, to be enjoyed by the beneficiaries, reminds us of those statues of almshouse founders similarly emigrated away, of which we've found three.

We here at London Remembers have our own definition of 'lost': it can mean truly lost, or just lost to London. This statue is 'lost' because it is now listening to the birds in Broadstairs rather than the traffic in Euston Road.

Osbert Sitwell's 1928 'The People's Album of London Statues', P128, gives: "The statue was erected on this site in memory of May 26th, 1906, when His Majesty, accompanied by Queen Alexandra, attended in Royal State to open the Hearts of Oak Benefit Society's present palatial offices in Euston Road, London, N.W."

The magnificent Reel Streets have a screen-grab from the 1933 'It's a Boy' captioned: "The taxi having just passed the Hearts of Oak Benefit Society at 158-160 Euston Road, their distinctive quoined gate posts with top ornament, corner with Churchway going off to the right. There remains a quoined gatepost on the east boundary of the Fire Station that still stands." And, 2019, stands still.

In 1966, when the Euston Road building was demolished, the statue was moved to the gardens of Maurice House, now a Royal British Legion Care Home, just outside Broadstairs. Google Street View shows the back view in 2019. This was presumably the new Convalescent Home opened by the Hearts of Oak Benefit Society in 1938.

The new head office was an architecturally advanced building (1968-70): a low suspended tower with a podium, still there, 2019.

Our image of the statue in Broadstairs come from Hither and Thither.

On eBay we found an old listing for some "images extracted from a Centenary Book produced {by} the Hearts of Oak Benefit Society of Society House Euston Road London NW in 1942". Here we found the black and white photo of the statue (captured "in the forecourt" but cut so as to show none of the background); the photo of the building; a photo of the 1906 opening ceremony; and this text:

“Twelve applications for the commission to execute the memorial were chosen form a large number received, the selected candidates being invited to submit a sketch model and estimate, not to exceed £1,000, for a statue slightly over life size, with a suitable stone base with bronze inscription plate. Subsequently three sculptors were invited to submit quarter-size models, and the final choice fell on the work of Mr. H. Hampton, a well-known sculptor of the day. The commission was put in hand in the spring of 1913, and by the time it was completed the war was in progress. Assuming that the war would not be lengthy, it was decided to postpone the unveiling of the statue until the campaign was over, when it was hoped to arrange a public ceremony. Time passed, and as there was no indication of the war coming to an end, it was decided, in February, 1918, to wait no longer. Accordingly the necessary arrangements were put in hand and the statue was unveiled on 23rd May, 1918, by the Rt. Hon. Lord Burnham, a member of the Society’s Board of Arbitrators. It is interesting to record that Queen Alexandra was represented at the ceremony, and that on another occasion she made a private visit to view the statue, of which she expressed here appreciation and approval."

The commission was probably prompted by the death of Edward VII in 1910.

This section lists the subjects commemorated on the memorial on this page:
Edward VII statue - lost

This section lists the subjects who helped to create/erect the memorial on this page:
Edward VII statue - lost

{On a bronze plaque on the front of the plinth:}Victoria regina et imperatrix...