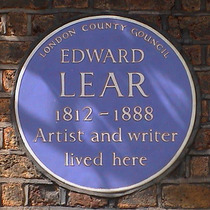 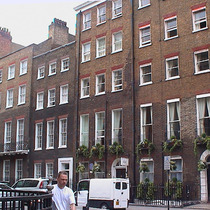 2016: Douglas Eaton told us the plaque has gone. Checking on Google Street View history: it was still there in July 2009, then number 30 and its neighbour to the east disappeared under scaffolding and wraps, emerging in May 2015 sans plaque. The works included replacing all the plate glass with properly fenestrated windows so the developers did something right. We'll give them a bit longer before we flag this plaque as lost.

December 2017: The plaque has not returned so we have marked it as lost. The brickwork has been cleaned and now looks so like plastic cladding that we had to touch it to check. Two pseudo-Dickensian notices are attached to the railings: one an advert for their 'Hearty Breakfasts' etc. and the other a hypocritical notice, 'we love cycles but please park them elsewhere'. Can you tell that we've rather taken against this outfit?

2018: Via Facebook, Steve Roffey tells us that these buildings, numbers 28-30, are modern facsimiles of the originals, and that EH retrieved their plaque but did not want to re-erect it on the facsimile so found an alternative Lear home in 2016 but, so far, no re-erection. We know of other reproduction Georgian houses around London and they seldom work completely. These ones are successful from a distance but close up they look fake, as we noted last year when we visited knowing nothing of the recreations.

This section lists the subjects commemorated on the memorial on this page:
Edward Lear - Seymour Street

This section lists the subjects who helped to create/erect the memorial on this page:
Edward Lear - Seymour Street

We initially struggled to identify just who the Countess of Rosebery was in 2...

We believe that the Roman numeral date is untranslatable and ought to be MCMX...