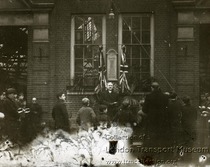 The date is more believable but this photo shows a memorial still veiled with a Union Jack, and it is not the same location as that shown in the first photo, though it could be the same building. Did they move it and unveil it a second time? Did they erect two memorials? They would have had to if they really did erect the first in 1917 since the killing continued long after that. Perhaps one of them is mislabelled and is not at Chalk Farm at all. Note also that neither photo shows the building in front of which the two grand-daughters are standing - that is clearly a post-WW2 erection.

October 2016: we were contacted by E. Evans who tells us "one of the names on the memorial in Harmood Street was Albert Evans who died in 1916. Albert's full story is in the blog at All the Old Photos."

As happened at many workplaces, a memorial was erected at the Chalk Farm bus garage to honour their workers who died in WW1. This one was erected on a wall in Ferdinand Place but was last seen in the 1960s. The photo of the grand-daughters of Joseph Thomas, one of the names on the memorial, standing in front of the building comes from the Camden New Journal of 13 March 2014.

The Chalk Farm bus garage was actually in nearby Harmood Street. From the magnificent Edith's Streets: "Chalk Farm bus garage. This opened in 1916 .... Closed in 1993. The site is now housing – gated housing behind a terrace with ‘AD 1995’ on the gable."

The garage, serving many busy routes, was very large. At the fascinating website Reel Streets you can see pictures (actually screen shots) from the 1961 film 'Flame In The Streets'. The picture with the bus shows Harmood Street with Chalk Farm Road in the distance, and the bus garage on the right. From these pictures we deduce that the garage covered the ground between Harmood Street and Ferdinand Place, all of which is now a residential estate around Collard Place. Harmood Street was clearly the main access to the garage so it seems odd that the memorial was in Ferdinand Place but presumably there was another entrance there.

This is not the only lost war memorial; we hear of them every so often. For example, Dr Andrea Tanner, the archivist at Fortnum & Mason, is searching for a war memorial that used to be on the premises in Piccadilly. She's checked the cupboards (and there are a lot) but it's gone. Conversely we read about a Willesden Boer War memorial that has found its way to Omaha, Nebraska. Perhaps someone should establish a website for matching these up: Lost and Found Memorials?

2018: Robert Davies told us that his mother, granddaughter to Joseph James Thomas, remembers a plaque in Ferdinand Place, on the back wall of the bus garage (where there is now a new wall). She remebers it being black, made in cast iron with the names in white, and with a small alcove where they put flowers, marigolds from the garden.

This section lists the subjects commemorated on the memorial on this page:
Chalk Farm bus workers who died in WW1

Bus driver at the Chalk Farm bus garage.  In the London Regiment of the Royal...