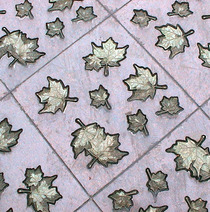 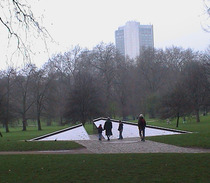 {On the tall face of the memorial:}
This monument commemorates the nearly 1,000,000 Canadians, almost all volunteers, who served in Britain in the two world wars, and especially the 110,000 Canadians who gave their lives in those wars for their country and for the cause of freedom throughout the world.

{On the ground to the south east of the raised memorial there is a compass, which contains, in the large central section:}
In two world wars one million Canadians came to Britain and joined the fight for freedom. From danger shared our friendship prospers.

{Around the brass outer edge of the compass circle:}
This monument was made possible by the generosity of ordinary people in Canada and Britain and in particular Canadian veterans of both World Wars who donated willingly for the cause. It was conceived and realised by the Canada Memorial Foundation (Conrad M Black PC & W Galen Western Co-Chairmen) which is particularly grateful for their assistance to Her Majesty the Queen and Her Majesty Queen Elizabeth the Queen Mother, Prime Ministers Brian Mulroney, Margaret Thatcher and John Major, Canadian High Commissioners Donald McDonald and Fredrik Eaton, Environment Secretary Michael Heseltine, Heritage Secretary Peter Brooke and Major General Desmond Smith.


{All the texts are also given in French.}

{Laid into the ground is a brass bar which runs the length of the memorial, cutting it into two sections and lined up on the compass on a approximately west north west bearing. From UWE we learn that it "is aligned on Halifax, Nova Scotia, the principal port of embarkation for the Canadian forces in both world wars."

Unveiled by the Queen. The Canadian Memorial Foundation website has a colourful photo of the ceremony. The two parts of the memorial symbolise the two wars. It is aligned with Halifax, Nova Scotia, the port of embarkation for the Canadian men and supplies who came to Britain. Built from hundreds of pieces of stone cut from granite on Anticosti Island in the Gulf of the St Lawrence River and from bronze castings made in Inverness, Quebec.

2017: Concerns about people playing on this memorial look likely to end in it being fenced in.

This section lists the subjects commemorated on the memorial on this page:
Canadian Memorial

This section lists the subjects who helped to create/erect the memorial on this page:
Canadian Memorial

The Canada Memorial Foundation has its origins in a Letter to the Editor publ...

{East face - Latin inscription with a bronze plaque below:}Translation of the...