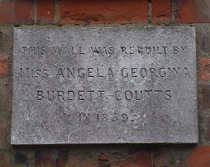 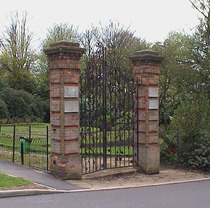 This wall was rebuilt by Miss Angela Georgina Burdett-Coutts in 1869.

We know Churchill built walls himself as a hobby but we think Angela probably got some help.

These plaques seem to relate to the maintenance and changing ownership of the grounds of "The Holly Lodge". The house (which was somewhere between Holly Lodge Gardens and the Holly Terrace section of Highgate West Hill) was built by Sir Henry Tempest in 1798. By 1815, when they married it was owned by Harriot Mellon and Thomas Coutts, who died at the house in 1822. It then passed to Harriot's second husband, the Duke of St. Albans, and, on his death it became the home of Baroness Burdett-Coutts, being finally broken up and sold in 1923, after the death here of her widower, William, in 1921.

This section lists the subjects commemorated on the memorial on this page:
Burdett-Coutts' wall - A

This section lists the other memorials at the same location as the memorial on this page:
Burdett-Coutts' wall - A