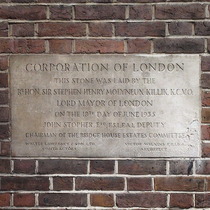 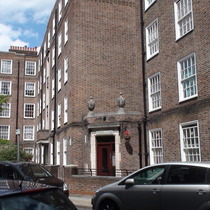 We noticed the little Bridge Mark on a number of blocks of flats in this area: e.g. Stopher House and Pakeman House. This Guildhall Historical Association paper explains the background which was a proposed new St Paul's Bridge. This involved the acquisition, from 1911, of land to provide approach roads and other nearby land to rehouse the population evicted from the former. But the project was cancelled leaving the BHE owning a large quantity of sub-standard property. Under pressure from Southwark Council BHE redeveloped much of it and these rather nice 1930's buildings are the result. The paper is not dated but at the time the BHE owned 366 flats in the area which were managed on their behalf by the Corporation of the City of London's Housing Department. We don't know if that is still the case.  Ian Visits has a more detailed post on the St Paul's Bridge that never was.

This section lists the subjects commemorated on the memorial on this page:
Bridge House Estates housing

This section lists the subjects who helped to create/erect the memorial on this page:
Bridge House Estates housing

This section lists the other memorials at the same location as the memorial on this page:
Bridge House Estates housing

This garden of remembrance was opened on the 10th April 1948 by Her Majesty Q...